With Australia’s recent Tennis success, it’s the perfect opportunity to get your kids making a racquet (in a good way).

Last week, Australia celebrated a new sporting hero when Ash Barty won the French Open. Barty is the first Australian woman to win the Paris event since 1973 and, in an era of Tennis brats, is a glowing endorsement for the Aussie game. Hard-working, tenacious and humble, she is also a perfect role model for children.

So, if you have ever thought about getting your kids into the game of yellow balls, sweatbands and bizarre scoring, then now is the perfect opportunity—there’s once again a hero for them to emulate.

Tennis can tend to fall by the wayside when it comes to sporting options parents will consider for their young ones. Bigger team-sports like soccer, footy and netball are more accessible; Tennis is seemingly just an isolating pursuit that breeds tantrum-throwers who like to grunt a lot.

Well, we want to dispel a few of those stigmas and reveal why picking up a racquet can be a great thing for your child’s development—both on and off the court.

On the surface (whether that surface is clay, grass or hard courts), Tennis appears as a very solo sport. The most popular version of the game is called ‘Singles’ after all, and that’s really the only edition we ever see on TV.

More than that though, it’s played by competitors who are largely focused on one thing and one thing only—themselves.

But don’t forget about Singles’ close relative, Doubles, which is the format you’re likely to find at your local club. It’s also definitely what your kids will start playing in a competition or with a coach. So, whereas some children could get lost in the crowd of a netball or footy team, there is little chance of that in a game of Doubles.

Playing as a duo, kids are neither alone nor obscured. This means there are plenty of opportunities to be involved in playing, strategising and—crucially—offering and receiving encouragement.

Tennis also has tremendous scope to develop children’s communal skills. In their early years, they won’t be doing much socialising before or after playing—making effective game time even more critical.

In team sports with no significant stoppages, there is little option for players to interact with anyone—teammates or opponents. But in Tennis, there is a pause between every point and a swap of ends after every game. This affords the time to not only converse with a partner, but also with opponents. Forging this sort of respect for everyone who is playing is an invaluable life lesson. 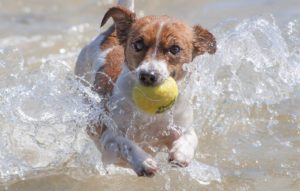 Tennis also builds upon the value of mutual respect into other areas like honesty and self-awareness. It’s one of the rare sports that can function without an umpire. It is scored by the players and can be similarly governed.

Players rely on each other to call shots in or out, they fetch balls for one another, and they keep track of the score together. Obviously, in children’s early stages of development, these actions will need parental guidance and instruction. But they will soon start to understand right from wrong all on their own.

Before you know it, your kids will have started to develop real-world traits like integrity and ethics—and you can’t beat that sort of education. 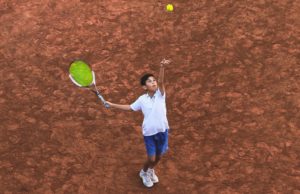 And, finally, don’t forget the two vital ‘F’ factors: fun and fitness. Tennis is placed firmly in the top ten most popular sports in Australia and is enjoyed worldwide. It can be played by people of all ages and capabilities, and is fairly inexpensive in comparison to plenty of other pursuits.

It’s also an amazing sport for fitness. It builds up aspects like strength, agility, speed, balance, endurance and hand-eye coordination. Furthermore, it is a thinking person’s game, meaning it will give the brain a solid workout too—perfect for kids. 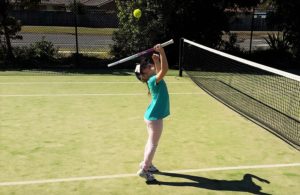 Tennis is one of the best sports kids can play. Even better, it’s an activity you can easily do with them, as opposed to just watching from the sidelines.

And if it’s not your thing, there are also plenty of professional outlets available to get your children into the game. Most clubs offer lessons for kids from a young age, and there are specific programs like Hot Shots, which has more than 2600 venues available nationally.

So, what are you waiting for? ‘Serve’ up a great pastime with your little ones and ‘let’ nothing get in the way. ‘Advantage’, everyone. 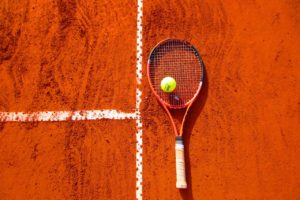 Let us know in the comment section below if your child is loving Tennis.

And if you’re after a personalised option to carry all that Tennis gear, then check out the Stuck On You Duffle Bags!

One thought on “Tennis out of Ten”