Are your kids into supporting sports teams? We’ve got a few great tips to make sure they do so in a healthy and respectful way.

For most of us, watching sport and supporting sports teams is a huge part of our lives. We’re passionate, committed and a little insane about it—and with competitions on all year across the globe, there are limitless avenues for our sometimes fanatical obsession.

Watching your beloved teams play is no longer a negotiable pastime—it’s more a weekly ritual. In fact, many would contend it’s the most important time of the week; less sports-inclined members of the family may disagree.

But because supporting sports teams is so ingrained in our everyday lives, it’s an incredibly common fixation we pass onto our kids. The life lessons we choose to impart consist of morals, values and which team colours to wear—but not necessarily in that order.

And as well as the professional teams we love to follow, parents will also inevitably support local teams their kids join. Quite often supporters at these games will be even more passionate and heated than those at a Manchester United or New York Yankees game. Suffice to say there’s plenty of emotion no matter the context. Therefore it’s crucial to instil healthy attitudes in kids when it comes to supporting sports teams.

But with our tips, they’ll be hitting holes in one, not pulling any punches, and keeping their eyes on the prize!

In a league of their clone

Being a parent is a job requiring athlete-levels of pressure. You’ve got vital roles like keeping your kids fed, putting a roof over their heads, and providing them access to a good education. Then you’ve got the really essential task: influencing which team they’ll support (i.e. yours).

You probably want to teach them your team’s song and have them in cute photos with you in matching supporters’ gear. But stuff like this is the parental equivalent of condemning the rookie to the bench, lost in the shadow of the star player.

It’s important to let your kids make their own decisions about a team that interests and engages them. If they want to follow a different sport or team to yours, you need to accept that.

If they make their choice based on a favourite player, because the team wears red, or because they think the mascot is funny, then those are all valid reasons. The main point is that the decision is theirs. It’ll help them realise they can make their own choices—one of the most valuable life lessons you can give them. 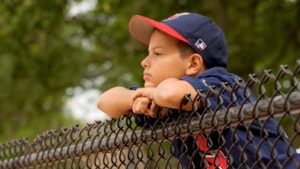 As necessary as it is to let kids make choices, you do need to exercise some subtle influence. That comes in the form of setting a good example—which is something you must do. They may not have chosen the same team (or even sport) as you, but you can rest assured they will emulate your actions when watching the games.

Looking at yourself through their eyes is key. So, getting angry or putting the remote control through a window after the referee makes a wrong call are not acts that are going to build a courteous and well-rounded fellow sports-watcher.

If something goes wrong in the match then laugh it off, compliment the players on their skills, or “leave it for the keeper” (and if you’re unfamiliar with cricket, this saying is the equivalent of the annoying song from Frozen: just let it go).

Your children won’t know they’ve missed anything and you can complain about it when they’ve gone to bed; that is if you can find anyone other than the cat who will listen. 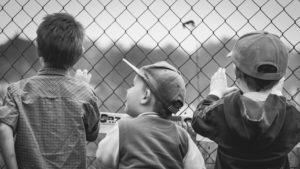 It’s significant to remember there are going to be slip-ups. You’ll have them and so will your children—we’re human after all.

But it’s critical to not have the attitude of “What happens on the field stays on the field”. If they throw a tantrum because their team loses on the bell, don’t spend too much time chastising them.

Instead, why not discuss the reasons why they’re upset? It’s a good way to segue into an intelligent discussion about rules, interpretations, or all the other intricacies of sport. It’ll get them focused on rational thought as opposed to an emotional reaction. Another great lesson for later on in life! 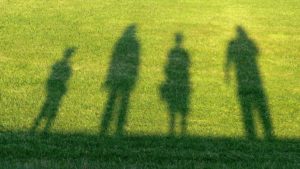 These days professional athletes seem to be ‘fair game’. While they regularly receive praise in both the public and online spheres, it seems to be more commonplace for them to cop harsh, unnecessary criticism.

We think it’s okay to criticise others mercilessly—and kids, sponges they are, can fall into the trap of blindly following suit.

A great way to avoid this unhealthy behaviour is to take your kids to watch local teams play. The closer proximity of competitors will humanise them and kids will start to comprehend that all players are people just like them.

They’ll start to make the connection that the professionals they watch every week deserve the same consideration. As they grow and experience things like social media, they’ll be sensitive to treating everyone equally in every situation. 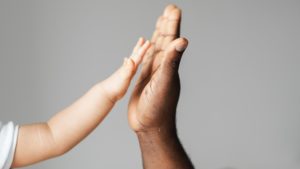 Grin it to win it

We’ve all heard the sporting tropes that come when a player is interviewed at the end of a match. Things like “We can only take it one game at a time,” or “We can’t control what the opposition does; only our own game.”

But the one cliché that doesn’t get enough attention in the modern world of hyper-competitiveness is: “It’s just a game.”

As their greatest influence in these formative years, it’s up to you to make sure they remember this. Whether playing it or watching it, sport has to be fun. 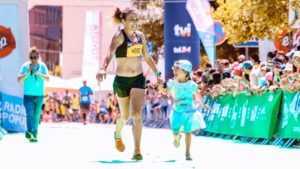 Do you have any other tips for helping kids with supporting sports teams in a healthy way? Let us know in the comment section below.