Has your child given you a Santa letter to post? Here’s a quick history of the custom and how to get a personalised reply!

A Santa letter is a Christmas tradition that has been around for hundreds of years. Yet it still seems immensely popular with young children today.

But it’s somewhat of a festive curiosity. Whereas everything these days is about phones, tablets or some kind of screen—the Santa letter is a win for old-school pen and paper.

Children just seem to accept that Santa Claus doesn’t do email or text messaging. Whether they think he hasn’t mastered the technology yet, can’t get any reception at the North Pole, or is too busy feeding the reindeer to set up the wi-fi—they just don’t question it.

But, in all seriousness, why would they? That’ll take away from the precious letter-writing time! They have an important list of must-have gifts and back-up gifts to create.

They’ve accepted that these lists are to be done by hand, and they’re just getting on with the business of making them happen.

But the convention of writing a Santa letter hasn’t always revolved around creating a wishlist of gift requests—quite the opposite in fact.

According to Time, it was a custom for Santa to actually write to children, not the other way around.

Parents would take advantage of the mystical quality of the man-in-the-red-suit to pass assessment over the actions of their children from the past twelve months.

It was, essentially, a way to discipline kids without having to actually discipline them. If parents couldn’t get kids to clean their rooms, Santa might stand a chance!

But it would seem, given the subterfuge of a Santa letter has morphed into something else entirely, that the effectiveness of the idea was never going to last. 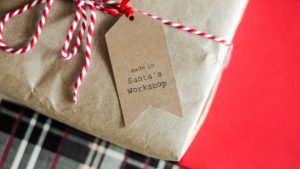 Santa letters are now about kids (politely) asking for what they hope to find awaiting them on Christmas morning.

For parents, it has a dual function. It’s a way to keep kids busy for half an hour while they actually compose their letters. And this is realistically the best Christmas present we can receive.

It’s also an essential guide for parents to choose the gift that equates to the least amount of drama on Christmas morning. Drama that can manifest as “This is the wrong colour!”, “Santa doesn’t love me!” or indecipherable words masked with a deluge of tears. It’s like having the keys to the tantrum-free kingdom.

So, while the original purpose of a Santa letter has changed, it still has plenty of pulling power as a Christmas custom.

If it teaches us nothing else, it’s that Santa Claus still holds plenty of bargaining power with kids! 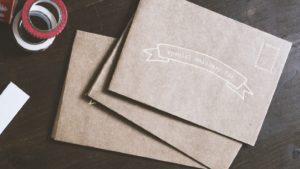 We love the original idea of the Santa letter as something being sent by rather than to Santa Claus. It encapsulates the simple enchantment of Christmas that sometimes goes missing amongst all of the craziness.

That’s why we have created personalised Santa Letters, available in a range of different designs and colours, that really make Christmas unique.

They include a personal greeting and an update from Santa about the reindeer and elves. On top of this, there’s a polite request of each child to leave a snack out before getting tucked into bed nice and early.

Most importantly, they ask children to continue being kind to others.

Check out our Santa Letters and the rest of our Christmas range right here.

Do your kids prefer to write letters to Santa or receive them? Let us know in the comment section below!