Do you have a child with a pirate fascination? We’ve got the reasons why it’s a good thing—as well as a few great swashbucklers to tackle the seven seas with.

Pirate fascination is another one of those obsessive phases that all kids seem to go through at some point in their development. Without any word of warning, everything is “Yarr!” this and “Yarr!” that—not to mention your own onset of anxiety that your child will develop a lazy eye from all the eyepatch-wearing.

But like we wrote about with the dinosaur phase and the unicorn phase, it’s something to embrace rather than shy away from. It means they’re curious, they want to learn, and they are looking to indulge developing creativity and imagination.

What is it about pirates that kids seem to be drawn to? Is it the rebellion? Maybe it’s the complete lack of interest in hygiene? Or perhaps it’s the parrot companion sitting atop their shoulders throwing insults around like rice at a wedding?

Thankfully, it’s none of those. Okay, maybe it’s the parrot thing just a little bit.

You should actually be excited if you have kids with a pirate fascination because it means they have an interest in adventure!

Utilise it as a way to teach them about the geography of where pirates would have sailed, the history of their journeys and, with any luck, plant the seed of travel they’ll hopefully unleash when they get older! 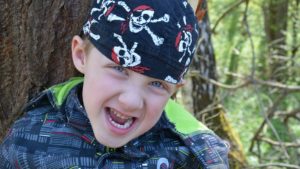 Topsail of the century

It could also suggest the beginnings of another fantastic attribute: leadership! Pretending to summon the crew or raise the mizzen mast has the potential to set them on a course of climbing ladders and inspiring others. 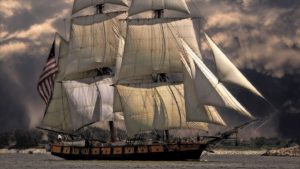 So, no, you don’t have to make the pirate phase walk the plank. But, like anything kids are into, an interest in pirates does need to be filtered through the best channels and kept from going out of control.

There are indeed some great pirates they can read about, watch and interact with—and they can all help your children indulge their swashbuckling side. But, no, we’re afraid Jack Sparrow is not really one of them.

To save you the hassle of discovering this hidden treasure of the best pirates, we’ve compiled our top five ways to board the Galleon and get into the Jolly Roger spirit!

There’s a good-to-very-likely chance plenty of kids are going to have their first experience with pirates when watching The Wiggles.

And what better way for this pirate fascination to start than with one who is friendly and loves to dance?

As a parent, you have probably stepped on your fair share of LEGO bricks. If the piece you’re extricating from your foot is an anchor, cannon or shark, then give yourself a pat on the back; you’ve chosen a fantastic, creative way to explore the pirate fascination.

Now go and get a band-aid; those bricks are pointy!

We’re not forgetting the source material—the classic book by Robert Louis Stevenson—but kids may need a little bit of a push to get to that point. What better way to do that than with The Muppets?

With the usual cast of characters including Kermit, Gonzo, Miss Piggy, Fozzie Bear and Rizzo—alongside actors including Billy Connolly—Muppet Treasure Island is full of fun, music and everything you’d expect from the childhood institution.

The Adventures of Tintin by Hergé follows the titular young reporter as he enjoys all kinds of adventures across the globe. The comic format makes Tintin appealing for younger readers, but the sophisticated concepts and language mean the stories don’t talk down to them.

Several of the books revolve around pirates: The Secret of the Unicorn and Red Rackham’s Treasure.

There’s probably no more quintessential pirate than Captain Hook from Peter and Wendy by J.M. Barrie. The book’s legendary status means the classic pirate appears countless times in all sorts of media, both print and film—making Hook accessible in so many different ways.

Aside from the book, the obvious choice is the version as portrayed by Dustin Hoffman in the Robin Williams’ led film adaptation Hook.

Don’t throw the baby out with the seawater

And that’s our top five for kids with a pirate fascination.

To complement the obsession, we’ve got all manner of products for kids who want their stuff covered in pirates! Check out our super-popular pirate design below and then personalise your own item on our online shop right here. 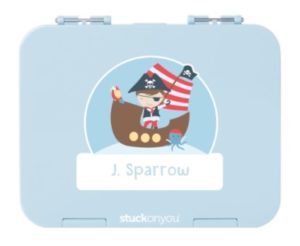 Do you have kids with a pirate fascination? Are there any characters they adore we haven’t included in our list? Let us know in the comment section below!