We’ve got our thoughts on why kids and robots are like peas in a pod; plus our top five perfect cyborg friends for your little ones!

Kids and robots pretty much go hand-in-hand. Or is that hand-in-piston? Hand-in-cog? Well, whatever it is, it’s hard to find a child that isn’t going to at least have a passing fascination with robots.

But why exactly is this? What is it about these mechanical fabrications of life that can be so appealing for children when they’ve got the real thing in the form of parents, relatives and friends?

Is it just the idea of having a servant who is at their beck and call whenever they want? It can’t be that simple—because that’s pretty much your job, right?

We’re pretty sure that’s what the “C” stands for. Either way, robots are cool and that’s one of the big reasons children are drawn to them.

They represent all kinds of attributes that children aspire to have. They’re often big and powerful. They can do all kinds of fantastic things like fly, talk in a cool voice, and never be made to nap.

It is easy to see why this might be an appealing option compared to authority figures with finite amounts of time, energy and patience. Not to mention the punishments that can come when that patience runs out. 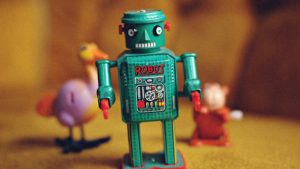 Okay, it may not be in the sense of time-travelling mercenary robots—à la The Terminator (probably for the best) or robots that will take them to school à la The Transformers (now that would be handy)—but technology is everywhere in some form from the second children are born.

They can’t help but be fascinated with phones and video games and machines that do so much for us—and this is only expanding year on year, decade on decade.

I’m sure we’d all love our own assistant robot to mow the lawn or do our taxes; so how can we expect our kids to be any different? 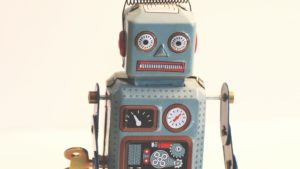 A face only a motherboard could love

And so, as we say with any of these inevitable childhood fascinations, embrace it! Just make sure it’s done with positive influences.

Start them off with some robot-inspired designs on their Stuck On You products like the ones below, and then check out our selection for the top five robots they can embrace as their own… 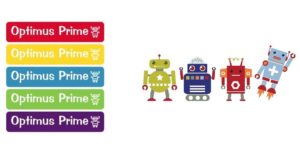 For a younger demographic, this Nickelodeon show is great to teach young children about getting along with others in spite of perceived differences.

It’s also got a fantastic voice cast that parents can appreciate, including actors from shows like American Dad and Cheers.

Next up, what is better than Pixar: the undisputed champion of great characters for kids?

Wall-E is an adorable trash compactor living and working on deserted planet Earth. Even with minimal dialogue in the entire film, Wall-E and its titular hero will impart lessons to kids about environmental damage—with a beautiful robotic love story thrown in for good measure.

While we’re in the Disney and Pixar realm, another of our picks is Baymax from Big Hero 6. While he looks more like a giant beanbag than a robot, he embodies the heights children can reach if they’re dedicated to learning and trying.

He also has some of the greatest visual gags for adults in a children’s movie!

This often overlooked gem of a film is essentially E.T. but with a giant robot. Main character Hogarth befriends his iron sidekick and must help to protect him from the government.

With strongly-resonating themes of friendship and loyalty, and portrayed in glorious hand-drawn 2D animation, The Iron Giant is the perfect movie for any child who has ever dreamed of having a two-storey robot friend to hang out with.

Another story where the young protagonist finds a super cool robot and then has awesome adventures. Even better with this guy, he turns into a car!

Everything about The Transformers is cool, and with so many iterations there’s a version for every age. Even the absolute littlies get their own show with Rescue Bots.

Do you agree that kids and robots are compatible? What are some of your child’s favourite robots? Let us know in the comment section below!