Contemplating why your kids adore unicorns so much? We’ve got insight for you that is totally ‘on point’.

We’re not talking the frivolous, that-is-so-last-season kind of trendy; unicorns have always been cool and show no signs of galloping away from that mantle.

But just why are kids so enchanted by unicorns (and adults too—if plenty of the décor we see for grown-ups is anything to go by)? What exactly is it about these creatures that are 95% horse and 5% letter opener that is so captivating?

Is it the mystery, the myth or the majesty? Perhaps it’s just the convenient place to hang your bangles when you’re not wearing them. Read on to find out!

As we revealed in our article about children’s obsession with dinosaurs, the appeal of unicorns is pretty similar. It takes a familiar, real-world creature and ramps up the cool make-believe qualities to 10.

Kids can observe real horses and then just let their developing imaginations go bananas. They can picture an extravagant horn that adorns the top of a horse’s head, a mane in all the colours of the rainbow, and even magical wings the unicorn can use to fly them to wherever their hearts desire.

So, yeah, unicorns are pretty cool! 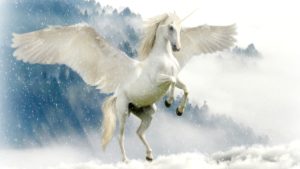 Unsurprisingly, unicorns have been present in all forms of media for centuries. They first appeared in ancient mythological works, and for decades have received plenty of love in books, television and online. We’ve selected our favourites for your kiddies:

There is no shortage of colourful characters to adore in the Toy Story franchise. But the third instalment saw the debut of an adorable unicorn named Buttercup.

With a gold horn and love hearts for nostrils, combined with a distinctly male voice, Buttercup does a great job of breaking down gender stereotypes—not to mention being hilarious.

The mouthful of a name aside, Princess Twilight Sparkle is the most prominent unicorn featured in My Little Pony: Friendship is Magic.

She is a fabulous role model for kids, both as a leader and as a character with a penchant for accumulating knowledge—especially about astronomy.

Swift Wind: She-Ra and the Princesses of Power

Whether it’s the original you remember from your childhood or the new version from the Netflix reboot, She-Ra’s unicorn Swift Wind is powerful, colourful and comes with the ultimate unicorn accessory: wings.

He is exactly the sort of unicorn children would ask Santa to bring them for Christmas (and we do not mean the toy—we’re talking about the actual animal).

Okay, we’re stretching the criteria here just a smidge with the last one. The Lego Movie’s Unikitty is technically a pile of lego bricks … in the shape of a cat … with a horn. Wait, did we really just say that sentence?

Infectiously positive and the ruler of what looks like the greatest place anyone could ever live, Cloud Cuckoo Land, Unikitty provides oodles for children to aspire to.

Ralph’s impression of a unicorn pretty much speaks for itself…

At Stuck On You, we totally get why kids adore unicorns—because we love them just as much! You can see this in the designs of our products like Labels, Bags, Bento Boxes and Stationery.

Check out our labels below—and click the links to see all the products you can personalise with a unicorn! 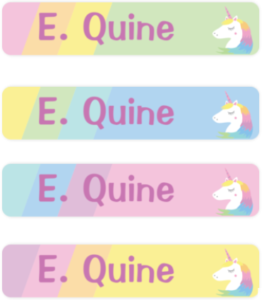 Are unicorns ‘number one’ in the eyes of your little ones? Do they have any other favourites? Let us know in the comment section below just how much your kids adore unicorns!